Yesterday was my first time out with a recognized Urban Sketchers' group out of Orlando Florida.  I had been invited to attend this big event which for us was at Disney Springs, Florida.   The USK 24 Hour Glbal Sketchwalk is in honor of Urban Sketchers' 10th anniversary as mentioned on Facebook. 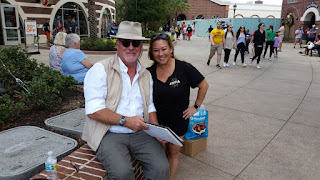 Noga Grosman heads the Orlando Urban Sketchers group and had come to Leesburg to give a presentation with our Leesburg Sketching group on Urban Sketching concepts.  It was through her I learned about and was invited to the global sketchwalk. 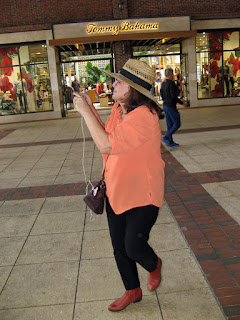 What an exciting time we had meeting up at Disney Springs in Orlando, Florida.  We met outside the Coca Cola shop and then dispersed to find a subject or spot that grabbed us.  We had about an hour or so to sketch and then had to meet back up where we started to "throw down" our sketchbooks to share with one another what we had done.  At about 11:45 photos and video were aired on Instagram.

It had started to rain so we moved under cover and placed our books back on the ground standing in a circle.  Each of us took turns telling a little about ourselves and showing which sketchbook was ours. 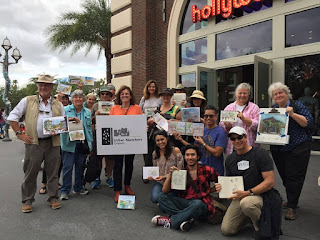 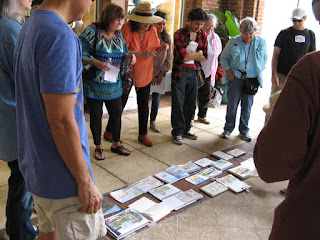 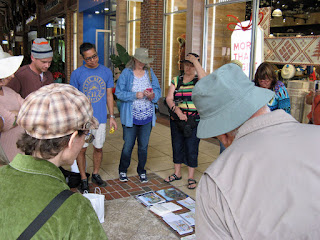 My husband came with me and once I found a place to sketch, he walked around taking photos for me.  I chose Starbucks because it's one of Terry's favorite places.

The line sketch is all I managed on site (at least I managed to finish that much as I'm a bit slow and was also nervous on this outing) and then this morning I added color.  The third photo below is another watercolor sketch I did from one of the photos Terry took for me.  He knows I like building toppers like this. 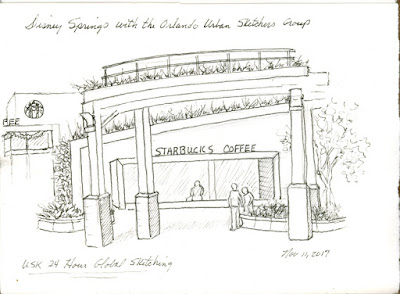 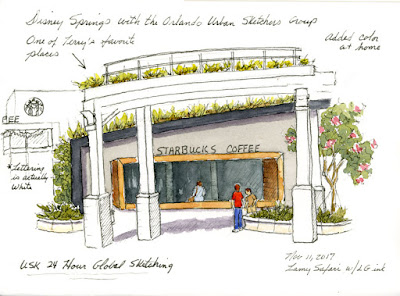 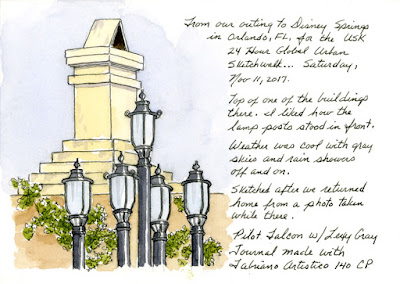 oh my gosh...this looks like SO much fun! Wish I could have been there!!!
Am hoping that James posts his sketch on his blog too.
Thanks so much for sharing!!!

So far I haven't seen where he's posted it. Although that's not saying much........I may have just missed it.