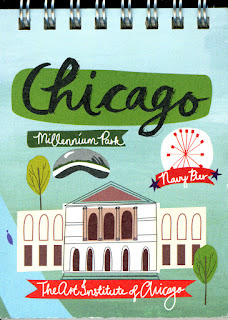 As mentioned in previous post, I have decided as one of my yearly challenges to work 75 ink only sketches but not necessarily in 75 days.  Some days I feel like working more than one sketch and some days I can't or don't feel like sketching.  OR, I may want to work any given day in another medium.  This will not include the Inktober challenge in October where we sketch in ink for 31 days.

For this challenge, I'm going to use this little 3 x 4 inch sketchbook my dear friend, Shari, gifted me with from her recent trip to Chicago.  With this little book, it looks like my best bet with pen is using either a Micron or Sharpie pen as fountain pen ink will bleed through, I'm afraid.

For the most part, I'll only work quick sketches using a pen and some days I might actually take a little watercolor or color pencil (paper may not take wet medium) to the sketches.  But for me, this challenge should be practicing creating form, texture, and value with ink lines/strokes and not using color to achieve that. 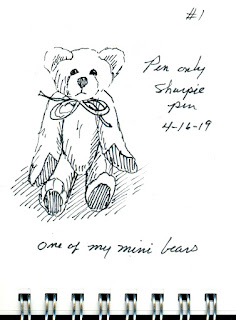 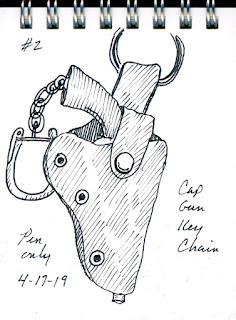 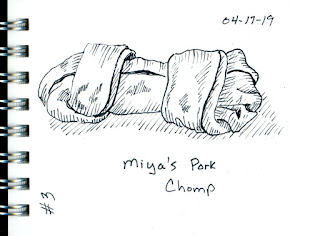 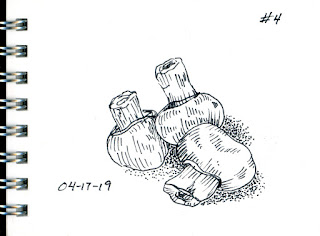 It's been a busy week with Terry and I bringing things over from storage to finally close it out.....after four days of non-stop moving and going through boxes and totes, we are half way there.  I think what's left now are empty boxes, odds and ends furnishings, suitcases, and camping gear.

As we go through everything, we're making the hard decision whether to keep or donate contents of these boxes/totes.  We meant to do this when the boys moved out 3 years ago but kept putting it off due to not wanting to face the task we're now involved in.

And while doing this, I'm also rearranging three rooms in the house for better organization as well as taking an inventory of my arts and crafts I've acquired over the years.  Some I will keep and the rest I plan to gift or donate to other people.

In all this chaos, I did manage a little sketching to include yesterday when our sketching group met up at the Library for quick sketching of people. 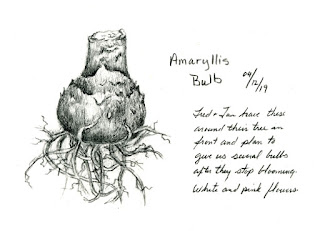 Procreate sketch of amaryllis flowers cut and sent over to me by our neighbor, Jan 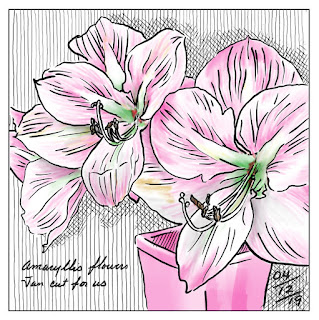 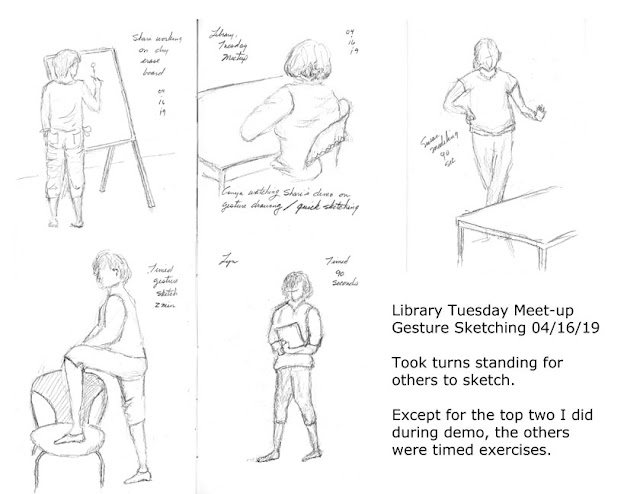 And last night I started a 75 Ink Only challenge.  I'll post that separately.  I've decided instead of the 75 DAY Ink Only challenge, I'm making it a 75 sketch challenge using ink only.
Posted by Susan Bronsak at 8:57 AM No comments: 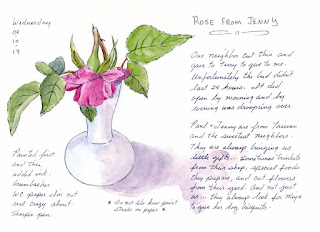 Along the property line, our neighbor has several different type rose bushes.  Every now and then, they will cut a flower (in bud stage) and send over to me.

My husband is the social butterfly knowing names and faces of half the subdivision, whereas, I don't get out and about and know very few.  I wave if out and see people but outside of that, I've yet to have a conversation with anyone, including our next door neighbor.  For them to think of me like that is quite the surprise and really very kind.

One of the rose bushes produces very small little roses.  They don't last long at all........even shorter than a larger type rose, which if you're lucky might last two or three days cut.  This one didn't make it 24 hours. 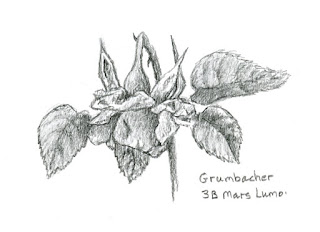 First worked in watercolor with pen and ink added later and then a quick pencil sketch ....... both in the Grumbacher In and Out sketchbook (watercolor).

I'm really trying hard to like this sketchbook but having trouble doing so.  I like a paper that allows for easy lifting but I have to say that this one goes too far making it difficult to paint on (unless you get your values the first time without having to add layers).  It streaks and lifts the previous layer even with a soft brush and light touch.

From the time we purchased the house we're in, we've had to clean up the lot (which is about 1/2 acre) where the house sits by removing MANY trees and shrubs just stuck growing all over front, back, and sides.  You couldn't see the house from the street, mowing was a true pain in the backside,  and was a real eye sore to the neighbors.

The house was a rental for many years so it's no wonder the property ended up so unsightly.  And many of the trees were planted too close to the house causing issues with roots and branches with roof, windows, etc.

We lost count after 30 the first year after we purchased the house.  And we've continued little by little shaping what's left and having more removed if considered unhealthy or a risk during hurricane season. 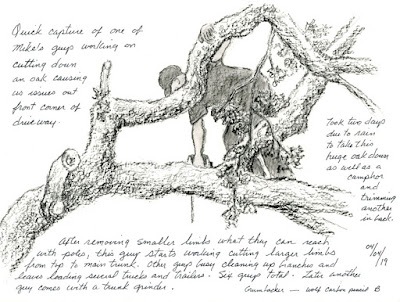 This week we had a huge water oak removed at the front corner of our house/driveway.  A large camphor tree near our garage right up against the concrete driveway, and heavy trimming of another camphor in the back that was top heavy on one side leaning in towards the house.

Next week we will have another type oak trimmed of two very large branches that grows over the driveway and house and a bowl depression at a fork that could rot from water and bacteria filled in with concrete.  The tree is in a healthy state so we don't want to have it totally removed.  Plus it provides us a great deal of shade we appreciate.

We love our trees but due to the risks we face each year, we had to do something.  And we still have plenty still standing.  Looks like a totally different place and our neighbors love us for what we've done.

Anyways, as the guys worked, I sat and watched as the oak was being taken down.  Amazing how they do it and safely without damaging anything around the trees or harm to those working below.  We were willing to move our pontoon and cars but they said not to worry about it.  And the orange tree and lemon under the oak was left untouched by falling debris.  The lemon tree was suffering from lack of sunlight so we should now see a major improvement.

This month was my turn coming up with a challenge.  I was playing an Ipad game when this one ad for another app popped up between rounds.  The app that was being advertised was "Calm" with an example when feeling anxious to stop and name 5 things you see, 4 things you hear, 3 things you smell, 2 things you feel, and 1 thing you taste.  I thought............what a cool idea for our next challenge.  (Just goes to show ad popups aren't always bad)

Using a 9 x 12 Stillman & Birn Beta sketchbook, I worked up the grid.  Perfect number of boxes at 2" square to evenly distribute across and down a page for the number of illustrations needed to fulfill the challenge.

Worked in ink first and then added the watercolor.

This layout also fits what several other friends are doing lately with their "smallies" and "littles" as they call them.

I wouldn't be able to do this too often as it's a major strain on my eyes but was actually a LOT of fun just working on bits and pieces of subject matter to fill a small box. 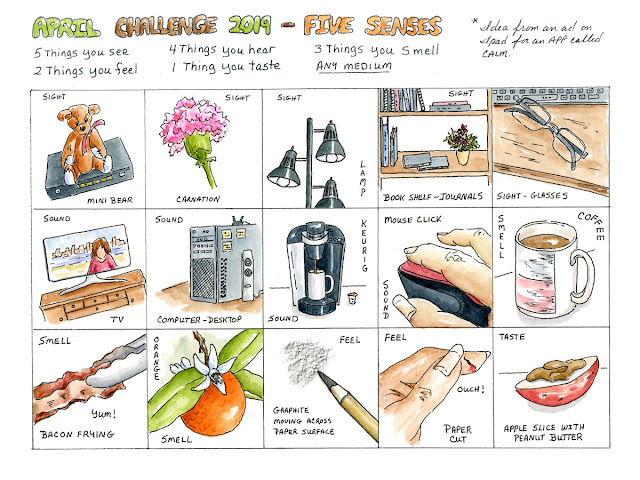 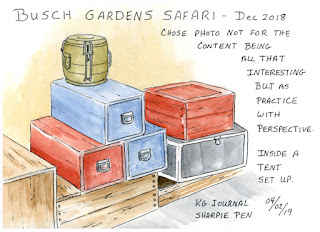 Perspective if one of those four letter words in my vocabulary I often struggle with.  But I do practice off and on when in the mood hoping eventually one day it comes easier for me.  Especially when we're talking on the spot viewing without the use of rulers and guidelines visualizing the horizon line that's not always evident due to the surroundings (at least to me).

Wanting to practice, I went through my photos and came across a good example to try and capture on paper.  Simple rectangular shapes without a lot of detail.  I liked this because the boxes are stacked changing the perspective from top to bottom.  Some areas I think I did ok and others not so much.

I started out with pencil and then adding the watercolor before the ink lines.  To the right, however, I ended up with the ink first and then the watercolor.  With a Sharpie pen, it doesn't seem to matter which is first but when using a fountain pen, the ink lines following color always look super stark to me.

Who Wants a Hug

Maybe I've worked through the worse of my slump.  Here's another sketch I finished a little while ago.  Using one of my miniature bears as my model.  His name is Cinnamon.

I pose him in various ways sketching at different times.  This pose just says "hugs" to me.

Fabriano Soft watercolor paper and Sharpie pen.  So I don't forget my color mix........Perm Aliz mixed with Sap Green.  Ground is an unknown mix that was on my palette.  Don't remember what colors I used :-( 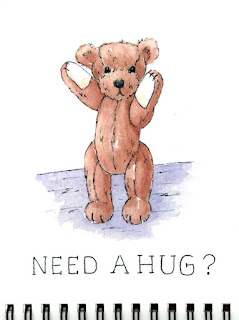 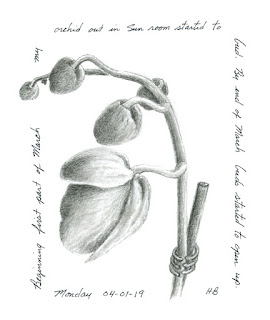 It was one of those nights where I just couldn't sleep.  I was up until about 6:30 a.m. before I finally tried again.

Nothing was on TV that interested me so I worked this pencil drawing of my Orchid where the buds are starting to open.

This makes year five for this orchid......the first I've ever attempted to grow.  It sits out in the sun room.

Grumbacher (back side) using Mars Lumograph HB pencil and tortillon.

**Still in the mood to draw rather than paint and mess with color.

This weekend was spent with two of my sons moving back from Ocala. 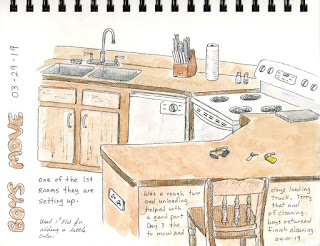 They started packing the truck on Friday making one trip and then again on Saturday with those odd pieces of furniture and whatnot that you can't fit nicely in a truck.  Both days started early morning and ending at midnight or later.  Then yesterday was Day 3 returning to mow and finish cleaning what was started on Saturday.  They finally finished at the place they were moving from and started last night getting their new place set up.

My youngest texted me a photo of the room they were working on and it happened to be the kitchen.  No surprise being both the boys have taken a real interest in cooking and baking.

I worked this simple color sketch of the kitchen using a 1 inch flat.

Grumbacher watercolor sketchbook
Posted by Susan Bronsak at 8:48 AM 2 comments: