The Near Finished Tile - Wood Burning

Took me a few days but I finally finished the wood burning on this tile that I started with the bear illustration.

My plan was to add lettering (a quote, poem or inspirational statement) but didn't know how I was going to transfer the lettering.  I bought transfer paper but testing it out made me think twice about using it.  Although advertised as being erasable, it was anything BUT erasable.  Plus it smears.

I spent hours researching transfer papers pyrographers use to transfer images onto wood.  I read reviews before deciding to make the purchase.  Unfortunately, what I ended up purchasing will not work as I had hoped.  I thought about winging it and using a regular pencil writing out what I wanted on the tile but feared messing things up along the way.....especially with placement of words.  Even pencil can be difficult to erase off wood (as I'm learning along the way).

Then I remembered an app I downloaded to my Ipad a couple years ago called Camera Lucinda.  I only tried it once when I first downloaded the app and then forgot about it.  Today as I was trying to decide how to proceed, the app came to mind and I decided to give that a try for this project.  It takes some getting used to but I managed to get the lettering down using an HB pencil with a light touch.

As I was burning the letters into the wood, I found myself feeling shaky.  I didn't feel nervous working the bear illustration.  Lettering for me is a bit tricky and will take quite a bit of practice before I can feel at ease with it.  But for my first attempt, I'm actually happy with the results (flaws and all).

The wire tip I used was the universal as I didn't care for how the ball tip worked that many use for writing or lettering.

Only thing left to do at this point is adding a protective coat of some kind but I need to do more research before I decide which way to go. 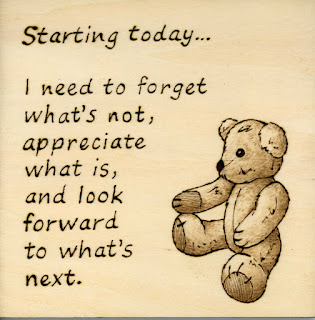 Posted by Susan Bronsak at 3:21 PM