Playing with a Forgotten Pen and Noodler's 41 Brown

Years ago I purchased two Pilot Metropolitan pens.  It was back when I first started using fountain pens and trying various ones out to see which I liked best.

With the trial and error of various pens, I found I preferred the EF nibs and unfortunately, the Metropolitans finest nib was a Fine.  What I failed to understand at the time was that not all similar size nibs are created equal depending on the country they are made, and because of that, I placed the Metropolitans in a drawer and forgot all about them.

After reading a suggestion Cathy Johnson made to a beginner asking what pen she should start out with, I decided to bring one of my Metropolitans back out and give it another try.  Cathy explained that she found the Metropolitan to write smoother than other pens many people choose to use (to include me) and was one of her favorites.

Following a day of playing, I have to agree.  The Fine on the Metropolitan lays down a line as fine as the Lamy EF nib.  I found it to be smooth even on Fabriano Soft paper my Lamy struggles moving across.  I was pleasantly surprised and may have found a new favorite.

While playing with the pen, I also decided to load it with Noodler's #41 Brown to compare with my other De Atramentis Document Brown ink. 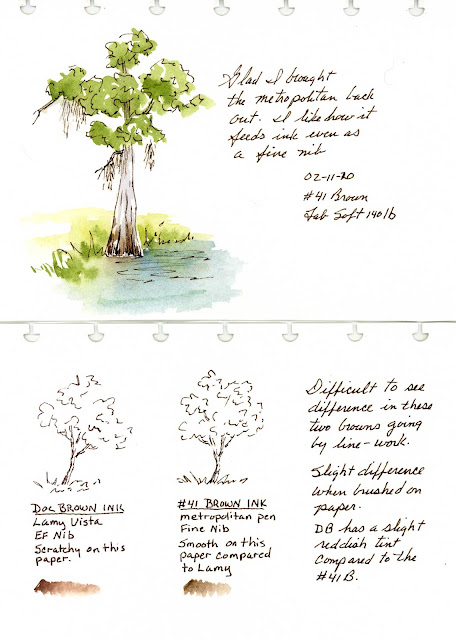 This next was worked on Stonehenge Aqua 140lb watercolor paper which has a smoother surface than the Fabriano Soft.  The pen just seemed to glide across the paper.

I first worked an initial outline of the flowers/petals leaving the inside line marks to later.  I wanted to see how the nib would lay down the ink over dried watercolor.  I have found that most often, ink applied afterwards appears to be thicker and darker.   It could be the ink....could be the nib........could be a combination of both....I don't know but I liked how it worked out with this pen and ink combination.  I was able to obtain lines that didn't overly stand out as has happened with other sketches where I applied ink after the color dried. 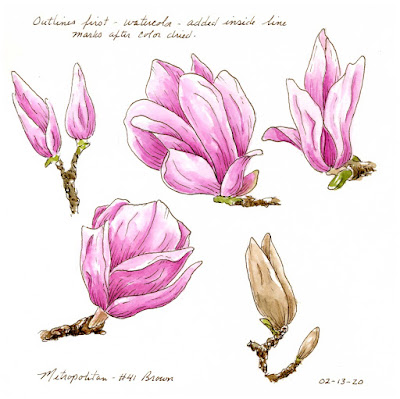 Posted by Susan Bronsak at 2:06 AM

I have gotten SO familiar with my medium point Lamy Safari that it's mostly what I use. Carbon black Ink. But now and then I do pick up another pen...I do have several. I'll go back and look at what I have in my box. I may be missing something!

I haven't tried a fine point on my Lamy pens much less a medium. I might have to get one of each size nib just to see myself how they feel and feed the ink.

And I should really consider finding homes for a few of my pens rather than leaving them to sit unused (if I can let them go.......lol)